One thing we haven’t had much of an opportunity to do on our blog is featuring our customers. Until now, that is. Today, we’re featuring Mike Route. Mike is a Wisconsin-based artist and award-winning blacksmith and owner/operator of Red Iron Studios. Among his custom and technical ironwork, Mike has found a unique and interesting application for copper sheet metal: custom range hoods. Let’s learn a little more about Mike and his work.

It’s been just over a decade since Mike Route established Red Iron Studio. Throughout those ten years, his work has included railings, wall brackets, sculpture work, furniture, and fireplaces. Mike’s work is all custom, and while he does have to turn down projects from time to time, he approaches custom work inquiries with an open and artistic mind. 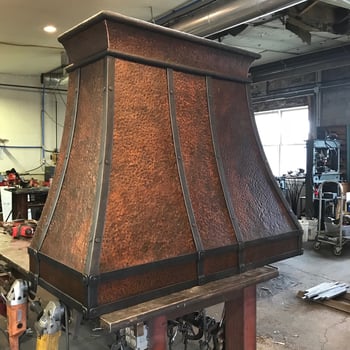 Like many of his projects, Mike’s range hoods were born out of an individual request. He had never built one, but when an individual came to him with the idea, it was an opportunity to learn and challenge his capabilities. And the result is nothing short of stunning.

From his first range hood, Mike has sourced his copper sheets from Mead Metals, and now he has just over a dozen under his belt. Oftentimes, Mike’s custom range hoods become focal points and conversation pieces within the homes of his customers. There’s a connection that comes along with creating a part of the story of someone’s home, and it’s a connection that helps to fuel Mike’s work.

When I spoke with Mike, it was fascinating to learn about his unique, artistic application for materials sourced from Mead Metals. I also asked him to share a bit about his experiences working with us, and here’s what he had to say:

“My dad has used Mead to source materials for his artwork, so I had a pretty good idea that they would work with me too. While I don’t think I’m their biggest customer by any means, hopefully, I’ll be using them more as my company continues to grow.

During all the times I’ve contacted Mead – Tony is who I work with – they’ve been super helpful. I told them about my range hood concept, and they ordered the copper sheets that specifically meet my needs. Even more than just supplying my material, Mead shows that they believe in what I’m doing. That sets a little fire under me to keep going.”

Looking Toward the Future

When Mike founded Red Iron Studio, it was him working by himself. A decade later, he has four full-time employees and a portfolio showcasing a wide range of custom architectural ironwork.

I asked Mike about the future of his company, and he talked about finding a balance between leading his team, continuing to design creative work, and getting his hands dirty. And while his business is poised for growth, he’s wary of becoming too big, “We’re looking into ways we can serve more people without becoming some vast, empty business. I think a big part of that is having that connection to the customer and their story.